Okay, so technically this isn’t searing.  Searing is cooking your meat on a very hot surface for a few seconds on all sides to develop a crispy crust, then usually finishing the cooking process in a different medium at a lower temperature, like in the oven or in a braise. This tutorial isn’t that.

Here I’m just going to show you how I like to quickly cook a chicken breast so it’s flavorful, juicy, and tender, with a crispy outer crust. Whatever, I’m just gonna call it a seared chicken breast.

Contrary to popular belief, searing does not “seal in the juices” of your meat.  Here’s a good video about how they figure that. Sure, Alton Brown’s experiment has a small sample size, but similar experiments have been performed by plenty of others with the same results. Despite this, people are still searing their proteins.  Why? Because it’s delicious playa! Come on! Searing creates that beautiful caramelization and crispy crust on the outside, creating more complex flavors and a difference in textures between the outside and inside that makes your food interesting.

All “science” aside, I still like to think that the way I cook this chicken does help to retain a little more juiciness than more traditional searing methods, so without further ado, here’s how I do it:

First, you gotta start with a thin cut of your meat.  A whole chicken breast is way too thick and will probably burn on the outside before cooking all the way through the inside, so I cut it in half horizontally (or in the transverse plane, for you anatomy geeks). Here is a single breast, cut in two with the tenderloin separated, and well-seasoned on both sides: 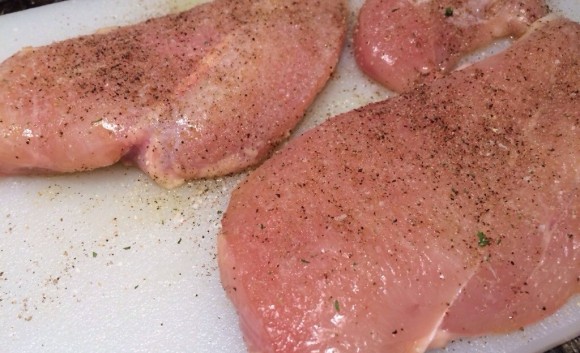 Get your pan hot on medium-high heat, add a little oil, and thrown those suckers on there. You should hear a sizzle as soon as it hits the pan.

As soon as they’re in the skillet, cover it with a tight-fitting lid. You’ll immediately see the lid steam up, and this will allow the meat to essentially steam in its own juices will getting a nice sear on the bottom. Let this cook for about 90 seconds to 2 minutes. 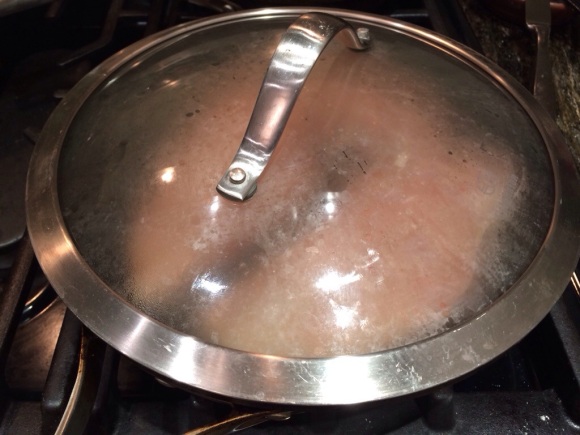 Once the lid is off, you can already see that the top of the chicken is starting to cook even though it hasn’t touched the cooking surface yet. Check it! 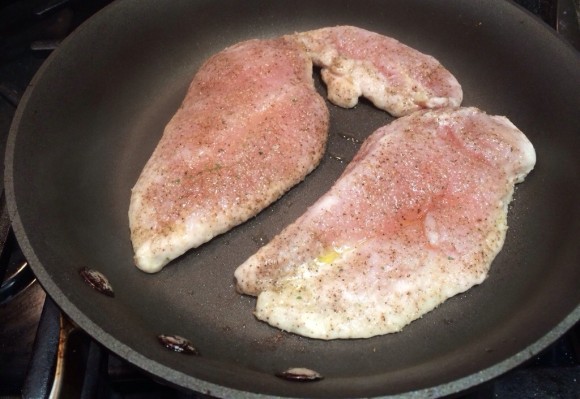 Flip those bad boys over, cover the skillet again, and cook for another 90 seconds or so.

You’ll end up with a nice, crispy on the outside, moist and tender on the inside, beautifully caramelized and flavorful chicken breast that you can chop up and toss into a salad, throw between two buns to make a sandwich, or just snack on if you’re trying to bulk after doing some squats. 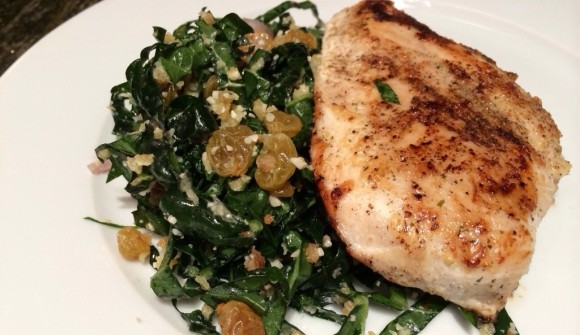 Here’s the recipe for the kale salad above, in case you’re interested!

This is a great way to cook any protein filet: chicken, fish, steaks, pork chops, etc. Give it a try, why don’t you.