My sincerest apologies to all 12 of you for being MIA the last couple months. The truth is, once the weather got better here in Boston, this blog took a backseat to being somewhere outside in shorts and a bro tank and not freezing. I think I’ve gotten a lot of the bro-tank-wearing out of my system so I wanted to get back to it!

Another thing I’ve been meaning to talk about is this: I don’t like tons of pictures.  In fact, one point I wanted to make when starting this blog was NOT to put up a million pictures in every post.  Do you really need a picture of me adding a teaspoon of salt to a pot? That’s not exactly a culinary school skill.  That being said, I realized that I’ve started posting more and more pictures in each of my entries and become something of a hypocrite.  So from here on out I’m going to try my best to only put pictures up that I think are necessary to clarify one of my instructions. I have a feeling I’m still going to put up a ton but whatever you guys can keep me accountable.  Yes, the 12 of you.

Anyway, here’s some Korean food I recently made:

This is a ssäm. It means “wrapped” in Korean. I just googled it. I’ve been eating this for quite some time in restaurants but never made it at home until I met my wife, who if you didn’t know, is Korean. It’s super easy. Also on top is a kim chi “salsa” I made.  I got the idea from David Chang on Mind of a Chef when he made a bulgogi burrito and I thought it was genius.

Okay let’s start with everyone’s favorite, the meat! Sorry if you’re favorite is actually the lettuce.

Most Asian stores will have thinly sliced beef like this, sometimes labeled under “beef for hot pot” or “sukiyaki.” I went big time with the ribeye but you can also use round.

Now for the marinade:

Puree your pear, your onion, and your garlic in the food processor until it looks like apple sauce like so.

Add your puree to the meat, then toss in your soy sauce, your brown sugar, and your sesame oil.  If you’re using a meat like rib eye, be careful when mixing because all the marbling will make your meat literally fall apart.

The beauty of bulgogi is that it’s so thin that you really don’t have to marinate it long.  You can basically start frying it up immediately after the marinade is done.  I went ahead and let it rest for 30 minutes before starting to cook but I really don’t think you have to.

While I was waiting, I started on the kim chi salsa. 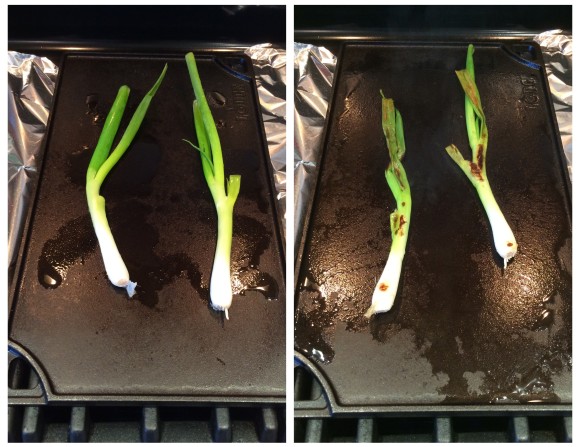 Chop up your kim chi and throw it in a food processor with your green onions.

Chop until everything is coarsely ground. Next add your cilantro and a squeeze of lemon (or lime)

Process some more and you’ll be left with something that you could serve at your local taqueria! Or if you live in Boston, Qdoba.

Okay let’s get back to the meat. It’s been marinating for a little while now, so all you need to do is throw it on the griddle.  If you don’t have a griddle, you can use a large skillet, but make sure you cook in small batches, otherwise all the liquid will come out and you’ll end up boiling the meat rather than grilling it, and that’s not nearly as delicious.

You’ll notice I added some mushrooms and green onions to the grill. This is up to you if you want to do it.  Either way it will taste great.

BTW, I highly recommend getting a cast iron griddle/grill pan.  I use that bad boy all the time and get great results every time.  Make sure all the liquid cooks out and the meat actually starts to brown! It’s gotta be a little crispy otherwise you’re doing it wrong. 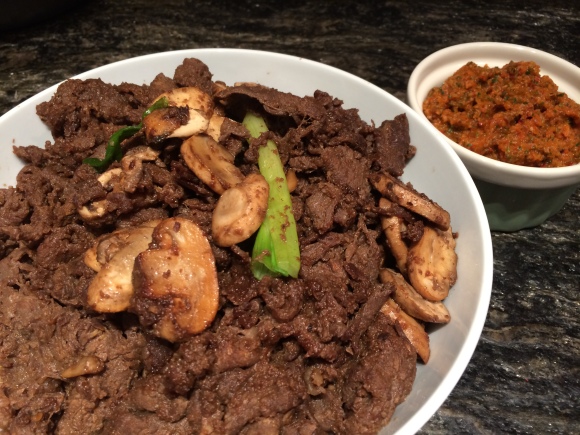 You can eat this as is, or wrap it up in your favorite wrapper (seawead, rice noodles, or good ol’ red leaf lettuce) with rice, some ssamjang, and the kim chi salsa. Enjoy y’all.

Pulse the pear, the onion, and the garlic in a food processor for about 15-20 seconds, or until it looks like applesauce. Combine the pureed mixture, the beef, both soy sauces, sugar, and sesame oil into a large bowl and mix gently to combine.

Once all ingredients are incorporated, heat a griddle over medium-high heat, or a 12″ skillet over high heat.  Add a little oil to the cooking surface and cook your bulgogi in batches.  Make sure not to crowd the cooking surface or too much liquid will run out of the meat and it will start to boil the meat rather than brown it.

Optional: add sliced mushrooms and green onion to your bulgogi while it’s cooking.

No ssäm is complete without ssamjang, or literally, “sauce for ssäm.” So here’s the wife’s recipe for the sauce.  It’s so good.

Beer pairing recommendation: Stone Go To IPA. It’s light, it’s crisp, it’s refreshing, but still packs enough hoppy, citrusy flavor to make it interesting.  Would go well with the fruity flavor of the bulgogi and stand up to the strong taste of the kim chi and ssamjang.