Waste not, want not. Let’s make some stock with that leftover rotisserie chicken from the tortilla soup!

Did you know there is a difference between stock and broth? I just learned this. Stock and broth are both made basically the same way: scraps of meat, bone, and a few vegetables boiled down in water like some slow-brewed meat tea. Stock usually ends there and is not especially tasty on its own, but when used as a base for a sauce, soup, or in place of water to cook grains, it can add something really special to your food. (Source: thekitchn)

Broth, on the other hand, can be further seasoned with salt, pepper, some wine, or other herbs and can be really delicious just on it’s own. I remember after the first race I ever ran (the 10-mile Broad Street Run in Philadelphia), they served cups of hot Swanson’s broth at the finish line and it was like I was eating at The French Laundry.  Just delicious and really hit the spot.

So I’m going to show you how to make a stock. It’s not really rocket surgery  but here it is.

Here’s your chicken, devoid of breast and leg/thigh meat. A shadow of it’s former glorious self. But wait, there’s potential in those bones.

I like to shred off even more of the meat before throwing it in the stock pot, it’s up to you what you want to do. The more meat you leave on, the more flavorful the stock, but I think it’s plenty flavorful with just the bones and skin, and that meat is just too good to boil all of it down.

I threw in half an onion. Most people would say throw in a carrot and celery as well (a mirepoix) but I didn’t have any. Also, I’m not making that much stock so adding more vegetables would add more sugars and would have made the stock kind of sweet. 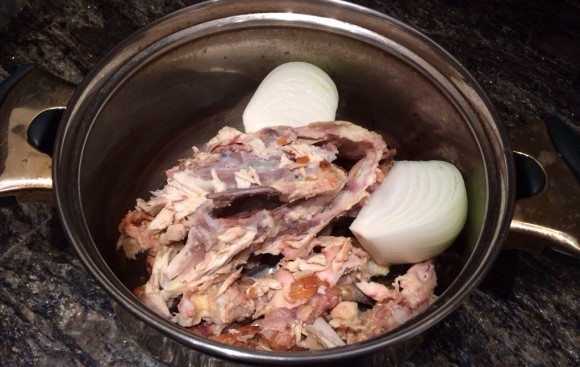 Don’t get lazy now. If you try just using a slotted spoon to get out all the bones it’s gonna take you FOREVER. Put a wire colander in a bowl and drain that stock.

There you have it. Easy as pie. Speaking of pie, this will make a fine base for a rotisserie chicken pot pie.

Bones and skin of 1 Rotisserie chicken, most of the meat removed
1 Half an onion
8 cups of water

Place all ingredients in a pot, bring to boil, then reduce heat and simmer, covered, for 2-3 hours. Drain stock through a wire colander into a large bowl. Discard bones.

One thought on “Rotisserie Chicken Stock”